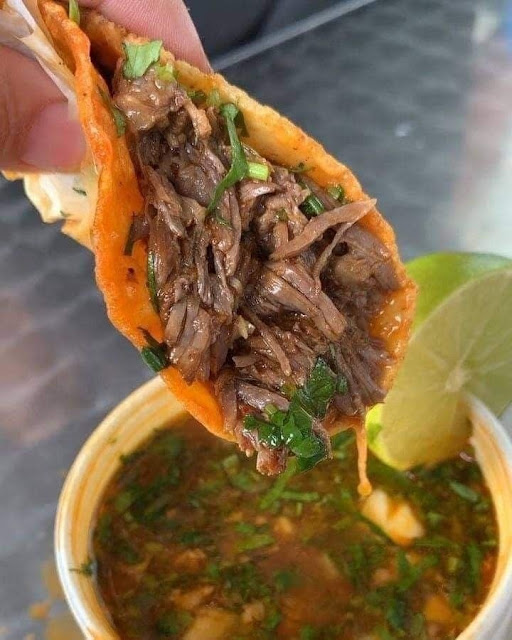 Birria is a popular Mexican dish that originated in the state of Jalisco. It is traditionally made from lamb, but it is more common for people to utilize beef today it is more affordable also easier to tove throughout Mexico and the United States.
There are several different ways to enjoy Birria. The first is “consum” which is a type of soup, or stew using dried chilies and other spices. For this variety, the meat is chopped and served in soup. This is why it is important to cook the meat until it is very tender.
Consomm served with diced onion, cilantro, chutney and lemon juice. It is popular at christenings, weddings and holiday parties. Birria has gained worldwide fame,.
* Ingredients :
+For meat
° 1 pound of bone-in lamb ribs
° 1 pound beef banana
° 1 pound sirloin
° 1 1/2 tablespoons salt
° 1 tablespoon pepper
° 1 teaspoon ground cumin
+For sauce/gravy
° 4 dried ancho chilis
° 4 dried guajillo chiles
° 1 chipotle pepper
° 8 peppercorns
° 2 cloves
° 1 teaspoon dried thyme
° 1 teaspoon marjoram
° 1 teaspoon dried oregano
° 2 bay leaves
° 1/2 teaspoon ground cumin
° 1/2 teaspoon ground ginger
° 1/2 cinnamon stick
° 8 garlic cloves
° 1/2 large onion
° 1 1/2 tablespoons salt
° 4 red tomatoes
° 1/4 cup of apple cider vinegar
° 2 cups of water
* Instructions :
Season the meat with salt, pepper and cumin
Cut the dried chili with scissors and remove the seeds
Fry the hot peppers in a small amount of oil in a frying pan for 2-3 minutes, stirring constantly so that they do not burn. sit aside
Add the cayenne pepper from the previous step to a small saucepan of boiling water for 10 minutes or until softened.
In the same pan where you sauté the chilies, add 1 tablespoon of the oil and cook the onions and tomatoes until they turn brown. Add garlic, pepper, bay leaf, cinnamon stick and all the remaining spices except for the ground cumin and ginger. keep cook for 6 min, stir often.
Add the cayenne pepper (including the water), the ingredients of the previous step, ginger, cumin, apple cider vinegar and water to a blender and blend until smooth. It will still be quite thick, but that’s okay. Strain the resulting sauce and set aside for the next step.
Pour the sauce over the meat in a large bowl and cover. If you are using the oven or stovetop methods, you will need to marinate for at least two hours or overnight. If using the electric pressure cooker option, you can season it, but this is not necessary.
Enjoy !