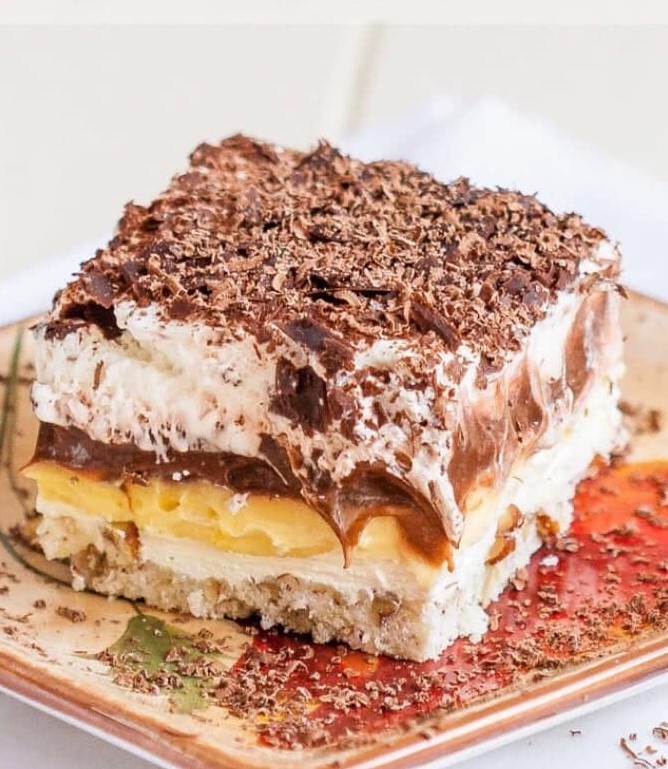 INGREDIENTS
• FOR THE CRUST, YOU’LL NEED :

• TO MAKE THE CREAM CHEESE LAYER:

• FOR THE CHOCOLATE PUDDING, I USED ONLY THESE TWO INGREDIENTS:

-1- you should heat the oven before at 350 degrees Fahrenheit.

-3- Mix all ingredients together in a tub, spread the mixture into a baking dish, and then pop it in the oven.
Bake it for about 20 minutes.

-4- Using the vanilla pudding as directed on the packaging.

-6- Add in the cream cheese, powdered sugar, and straight-up whipped cream to a blender.
-7- Blend together until light and soft.

-8- You need to let the crust cool, then l Layer the cream cheese mixture thinly on the pie crust.

-9- Spread over the cream cheese with the chocolate pudding, then the vanilla pudding.

-10- Add the whipped cream to the end and sprinkle it with the chocolate.

-11- Refrigerate for a few hours such that the cake sets.
ENJOY IT!!