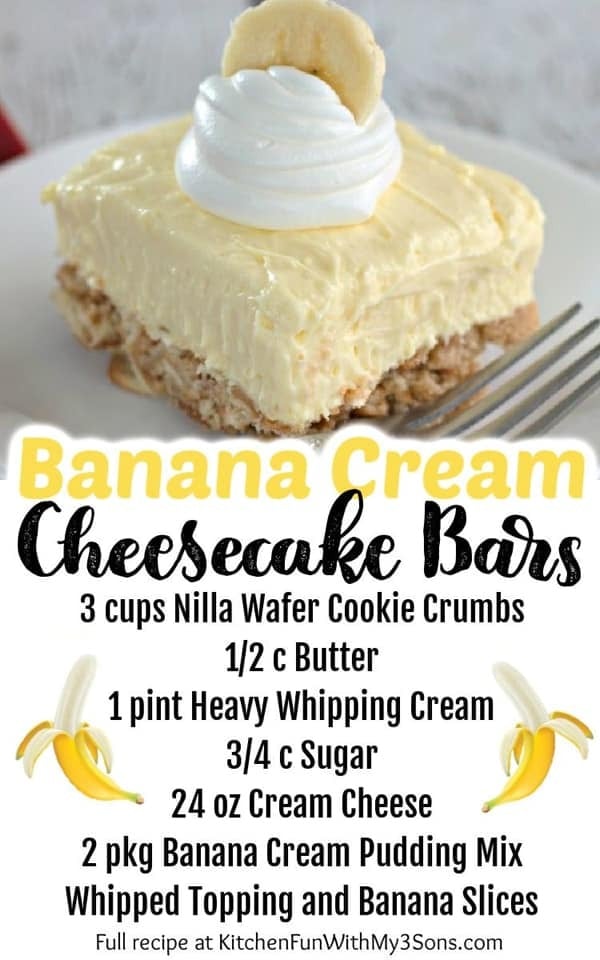 The following ingredients are what you’ll need to make these banana cheesecake bars:

° Three cups of vanilla wafers, I used about an 11-ounce can.
° Melted butter.
° Heavy whipping cream head.
° 3/4 cup sugar.
° cream cheese, I used 24 oz.
° 2 K quick-prepared banana mixture cream.
° For decorate, I use whipped banana tranches , but they are optional.

* How to make these Banana Cheesecake Bars

Step 1:
Using a medium mixing bowl, mix the wafer crumbs with the melted butter until well blended.
Step 2:
Second, I pressed the mixture into the bottom of an 8″ x 8″ baking pan (a 9″ x 9″ baking pan would work well too) which had been glued to a piece of parchment paper, with the excess paper pasting the top of the sides.
Step 3: I then put the crust in the fridge or freezer to cool while I finish the rest of the recipe.
The fourth step:
Next, I combined the heavy whipping cream and the white sugar in a large metal mixing bowl and stir until smooth with an electric mixer or blender on medium speed until solid. peaks formed and the bowl was preferably placed in the freezer for 10 minutes to make sure it’s