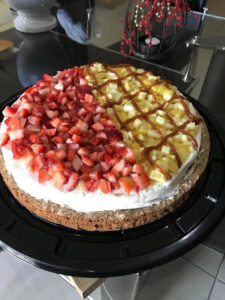 Preheat the oven to 180 ° C, grease a cake pan with a little butter, then sprinkle a little flour and set it aside.
In the bowl of an electric mixer, beat the sugar and soft butter until a creamy mixture is obtained.
Add the flour, the beaten egg, the banana and the cinnamon while constantly whisking until the ingredients are combined.
Pour the milk, then put the chopped dates, and mix the ingredients by hands until we get a homogeneous mixture.
Distribute the mixture in the tray, then put it in the oven for fifty minutes until it is well smeared.
To prepare the sauce, put sugar, vanilla, cream, and butter in a saucepan over the heat.
Mix the ingredients until they overlap, and leave them on a low heat until they boil and stick a little.
Take the cake out of the oven, leave it until it cools, then pour the sauce on top, and serve.